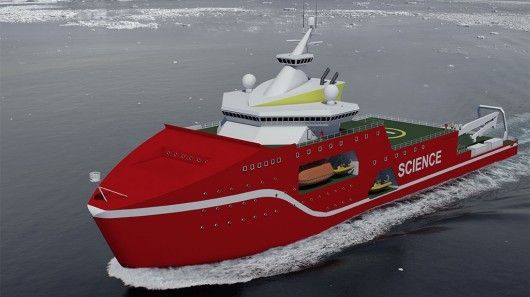 This British Ship Will Be the World's Most Advanced Research Vessel

Rahul Kalvapalle — May 1, 2014 — Tech
References: nerc.ac.uk & gizmag
Share on Facebook Share on Twitter Share on LinkedIn Share on Pinterest
Britain's Natural Environment Research Council (NERC) has been given the go-ahead by the British government to build a humongous ship that will take to the Antarctic and Arctic to conduct polar research and experiments in the Arctic and Antarctic. The as-yet-unnamed ship will cost $336 million to build.

The giant polar research ship will be 129.6 meters long, will be able to displace 14,098 tons of water and will have 4,200 cubic meters of cargo space. It will be fitted with ice-breaking equipment that will allow it to plow its way through ice up to 2 meters thick. Its bright-red hull will be home to 60 scientists and support staff.

Once the ship enters service in 2019, it will be the most advanced research ship in the world with modular laboratories, environmental monitoring systems for studying the air, deep water and the seabed, a helideck and a hangar for deploying helicopters. It will also be able to act as a central hub from which autonomous ocean vehicles, drones, robotic submarines and underwater gliders can be controlled.
3.6
Score
Popularity
Activity
Freshness
View Innovation Webinars