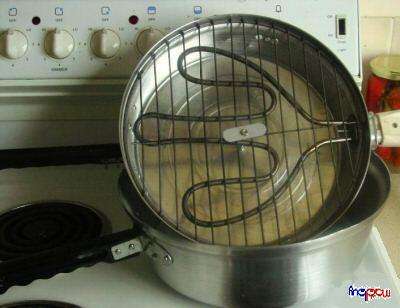 Ronald Sayegh — September 29, 2007 — Lifestyle
References: madbuy.au
I think this must be the most amazing oven in the world! It gets up to the same high temperature of commercial pizza ovens, but runs on standard electricity. The Lebanese Pita Bread Baking Oven Pot is very small and handy, but has to be handled with care -- it gets very hot -- 500 degree Celsius hot!

I've had my own kiosk for the last 12 years and thought selling food would be a good source of extra income. I wanted to make pizzas but was never able to find an oven that ran on normal power that could bake a pizza in five minutes after its ordered. The oven is the greatest investment for people in the industry -- you can run it at 400-500 degrees all day in a small kiosk. I found this gem on Madbuy and ever since picking it up, my Popas! kiosk in Adelaide has taken off. Next year I've decided to open a full-blown pizzeria.

I use three Pita Makers, all in a different size; I would recommend having at least two. In 15 minutes, you'll be able to prepare enough pizza to serve six. At my new pizzeria I want to bake in front of customers, I just have to practice my flipping skills!