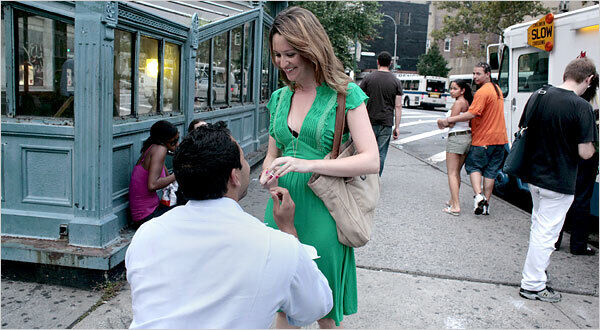 "Whether inspired by tenderhearted sentiment, the desire to record history in the making or something more narcissistic, some marriage-minded men are remaking one of humanity's most private moments into one that can be instantly shared with family, friends and even, thanks to the Internet, virtual strangers," The NY Times reported. "They are conspiring with photographers who, with all the stealth of covert operatives, lurk in crowds, behind bushes and in the darkened recesses of restaurants to capture the delighted, unposed reaction of the fiancÃ©e-in-the-making."

By continually recording life's events, our society could become less genuine -- in a sense, we're always acting when the cameras are rolling. He isn't proposing a life of love and commitment to the woman he loves, he is putting on a show for others. Our memories will become less reliable because we are less in the moment. Instead of focusing on that intimate moment, the focus shifts to how we may look or sound and what others will perceive of it later.
3.7
Score
Popularity
Activity
Freshness
Get Better and Faster