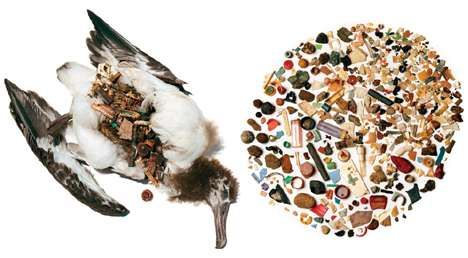 Alex Covert — August 31, 2007 — Eco
References: treehugger
Share on Facebook Share on Twitter Share on LinkedIn Share on Pinterest
It may have been palatable but, it wasn't digestible. Please let this be a lesson in recycling: The young Albatross was found dead and full of trash. Birds often cannot distinguish human garbage floating in the ocean from natural food. It's called a trashcan, people.

The seabird was being studied by the manager of the State of Hawaii's Kure Atoll Wildlife Sanctuary. The saddest part is how avoidable this was; there is no excuse for killing wildlife due to eco-negligence. The video gives a deeper description on the impact our environmental negligence is having on natural, with a heavy focus on Hawaiian seabirds.

Albatross Birds (Wikipedia):
"Albatrosses are highly efficient in the air, using dynamic soaring and slope soaring to cover great distances with little exertion. They feed on squid, fish and krill by either scavenging, surface seizing or diving. Albatrosses are colonial, nesting for the most part on remote oceanic islands, often with several species nesting together. Pair bonds between males and females form over several years, with the use of ritualized dances, and will last for the life of the pair. A breeding season can take over a year from laying to fledging, with a single egg laid in each breeding attempt.

"Of the 21 species of albatrosses recognised by the IUCN, 19 are threatened with extinction. Numbers of albatrosses have declined in the past due to harvesting for feathers, but today the albatrosses are threatened by introduced species such as rats and feral cats that attack eggs, chicks and nesting adults; by pollution; by a serious decline in fish stocks in many regions largely due to overfishing; and by long-line fishing. Long-line fisheries pose the greatest threat, as feeding birds are attracted to the bait and become hooked on the lines and drown. Governments, conservation organizations and fishermen are all working towards reducing this by-catch."
5.4
Score
Popularity
Activity
Freshness
Attend Future Festival