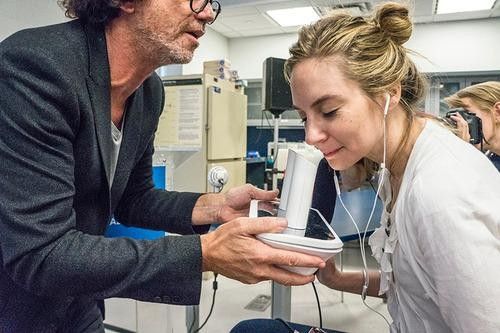 The oSnap App Allows You to Tag Photographs with Aromas

Rahul Kalvapalle — June 21, 2014 — Tech
References: news.harvard.edu & yahoo
Share on Facebook Share on Twitter Share on LinkedIn Share on Pinterest
Scientists at Harvard University have successfully used an app called 'oSnap' to carry out the first ever transmission of scent. The scientists transferred a champagne and passion fruit macaroon odor from Paris to New York using an ingenious new communication platform called the oPhone.

Here's how it works: you take a photo of something and use the oSnap app to 'tag' the photo with aromas, which you can choose from a scent bank containing over 3,000 odors. The smells, which have names like 'Plantation' and 'Paris Afternoon,' are then transferred via a pipe-shaped smelling device called an oPhone Duo. Users can even create their own scents -- some user creations include 'Lady Gaga' and 'Smoky Beach.'

Recipients can then use their own oPhone device and app to experience the scent you're trying to share with them.

Aside from being indescribably cool, the ability to transfer scents is sure to have fascinating marketing implications. The scientists are running a crowdfunding campaign to raise funds for production of the oPhone, which could start early next year.