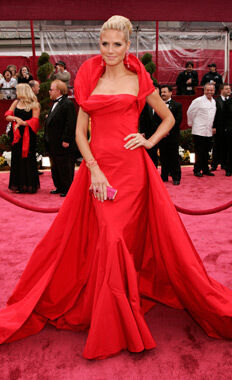 Fashion designers compete to dress A-listers, like Heidi Klum who dazzled in a red, backless, shawled Dior Haute Couture gown. Fashion journalists drool over the opportunity to pinpoint the hottest and most atrocious fashions walking the red carpet. Particularly for female celebrities, there is a lot of pressure to be noticed, but to stand out dramatically, stars often have to take risks.

There's a very fine line between shining in a stunning gown and being heralded as a major trend setter and from being pegged as a victim of the worst dressed list. This year, it seems a lot of red made it into the list of beautiful apparel.

Check out the gallery which include image of Heidi Klum, Helen Mirren in Georges Chakra, Miley Ray Cyrus in Valentino, Anne Hathaway in Marchesa, Heidi Klum in Dior and Katherine Heigl in Escada.