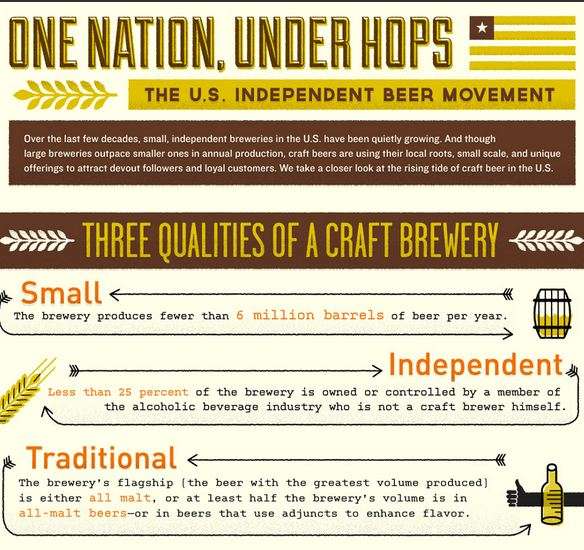 The 'One Nation, Under Hops' Infographic Looks at Independent Breweries

Senduran Bhakthakumaran — April 24, 2012 — Lifestyle
References: columnfivemedia & dailyinfographic
Share on Facebook Share on Twitter Share on LinkedIn Share on Pinterest
When choosing a beer, most make their selection from a small handful of brands, but according to the 'One Nation, Under Hops' infographic, there are more brands to be considered. This infographic explores the world of beer brewing and its recent development as a larger market.

There has been a rise in the tide of independent breweries recently, and one would do well to understand this movement in more detail. For example, the infographic shows that small breweries are currently driving growth in the beer industry. When considering the amount of barrels sold in 2010, five percent were from domestic craft breweries while the remaining 95 percent was from all other beer sales. This infographic also explains the ins and outs of beer crafting breweries so that individuals can understand how small breweries impact the entire industry.
4.6
Score
Popularity
Activity
Freshness
Attend Future Festival Virtual

Summer-Savvy Statistics
The 'How Does Your Beach Compare?' Infographic Examines Various Locations