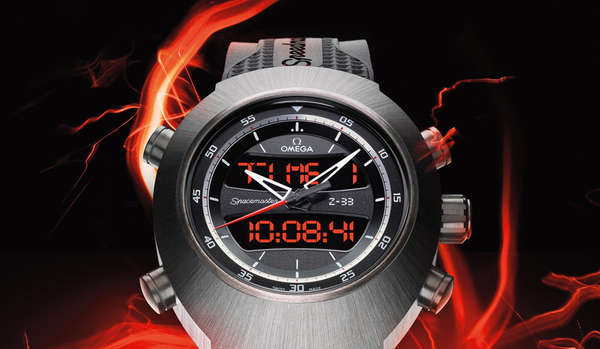 The Omega Spacemaster Z-33 has a Sci-Fi Appeal

Jen Chae — August 9, 2013 — Fashion
References: omegawatches & fancy
Share on Facebook Share on Twitter Share on LinkedIn Share on Pinterest
With its red digits on a black watch face, the Omega Spacemaster Z-33 has a sci-fi-esque appeal. The watch has a smooth silver case that outlines the dial, but is much thicker than the usual, which makes the design eye-catching. The Spacemaster also features five prominently bulky crowns, giving off an industrial vibe. The Spacemaster proves its name with a fierce design that looks as if it could have its own engine.

As well as its stopwatch-like watch dial, the background displays digital dates. The model's numbers are presented in minute intervals, numbering from 5 to 55. Overall, the model has a sportier look than most luxury watches. It is also attached to leather straps, which makes it the perfect casual accessory.
6.2
Score
Popularity
Activity
Freshness
Attend Future Festival