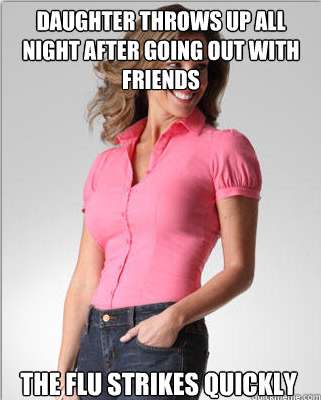 The Oblivious Suburban Mom is Blind to the Actions of Teenagers

Jason Soy — January 13, 2012 — Pop Culture
References: buzzfeed & gigglefactory.tumblr
Share on Facebook Share on Twitter Share on LinkedIn Share on Pinterest
Some people may find this Oblivious Suburban Mom meme totally relatable, though it’s hard to fathom a parent that’s this naive to the actions of her teenage sons, daughters, and their friends. Whether it’s her daughters throwing up after a wild night of partying, her son growing marijuana in his closet, or one of her son’s friend’s physical attraction to the Oblivious Suburban Mom, she always chooses to believe in a more wholesome version of the truth rather than reality. It makes for quite a hilarious image macro as readers see just how much these kids are really getting away with.

Funnily enough, the original image for the Oblivious Suburban Mom comes from a JC Penny ad. It later surfaced on Reddit, where this meme began picking up steam until its current status of full-fledged meme.
6.7
Score
Popularity
Activity
Freshness
Attend Future Festival Virtual