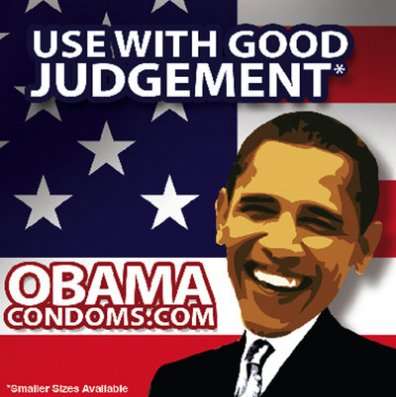 Obama Condoms for Your 'Little' Democrat

The makers of the controversial TheSockObama sock monkey claimed to be big Obama supporters. In contrast, the people behind ObamaCondoms are happy being silly.

For example, the company notes, â€œThese are uncertain times. The economy's a ball-buster and the surge went flaccid: but now there's Obama Condoms, for a change you can believe in!â€

They also joke, that ObamaCondoms, â€œWon't leave a bitter taste in your mouth.â€

As for the inspiration behind the condoms, the website divulges, â€œWe decided long ago (sometime after Super Tuesday) that it was time for the people of this great nation to start focusing on the important issues of the day, like politicians and their sex lives. So we created ObamaCondoms for those of you who just can't decide when to withdraw...â€

They even have a facebook group you can join.