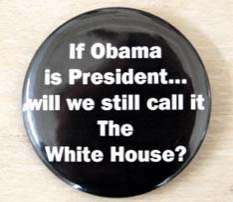 It took a while for the cuddly sock monkey before it was deemed racist and the makers decided to discontinue it. However, this new pin is so obviously racist, I wonder how it even got made in the first place.

Not only was the "If Obama is President will we still call it the White House" made, it was being sold at a recent Republican state convention. The ignorant pin was sold at a booth hosted by Republicanmarket.

While it's very common to attack political opponents, this pin crosses all red lines. It is not even vague or ambiguous. The message is a blatantly clear mockery of people of color. Whoever participated in the making of this hateful item should be very ashamed of themselves.