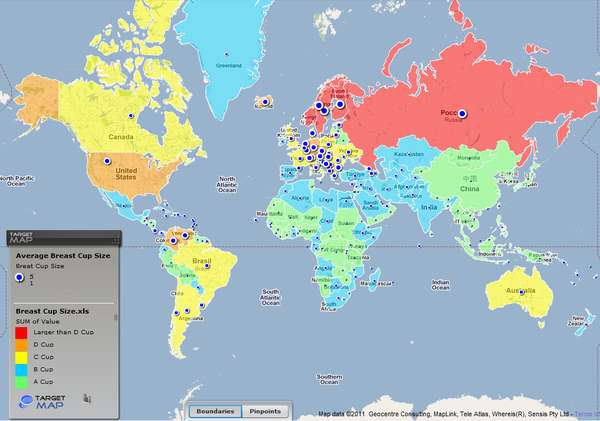 Erin Kirkpatrick — April 3, 2011 — Naughty
References: geekinheels & brobible
Share on Facebook Share on Twitter Share on LinkedIn Share on Pinterest
With these interactive charts, you can see the chestiest and most well-endowed countries in the world. The U.S. boasts a voluptuous, mostly D-cup population; Russia, Brazil and Scandinavian countries are similarly busty. On the opposite end of the spectrum, China, Bolivia and Tanzania are reppin' the mosquito bites.

Never fear, men -- you aren't excluded from these naughty comparative maps. The Congo has the largest penis size on average at 17.93 cm, while the smallest average size is found in South Korea at 9.66 cm. At 14.68 cm, Canada outshines the U.S., who don't seem to measure up at 13.48 cm.

Food-Encrusted Maps
This Eno Print Campaign Will Stimulate Your Appetite