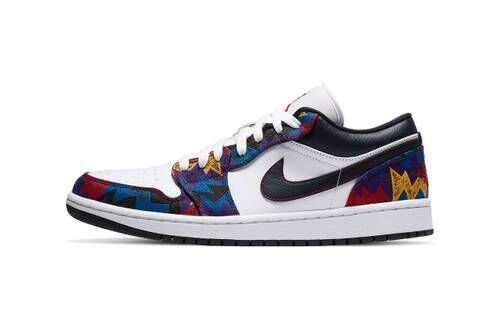 Amy Duong — August 19, 2020 — Fashion
References: nike & hypebeast
Share on Facebook Share on Twitter Share on LinkedIn Share on Pinterest
Jordan Brand's Air Jordan 1 Low Nothing But Net sneaker is spotlighted by the new colorway. As suggested by the name of the tonal update, it honors the legendary Michael Jordan and his successful careere. The pattern that adorns the sneaker was used back in 2014 on a pair of Air Jordan 7s.

One of the athlete's most iconic outfits was one that he wore during the Olympic Games back in 1992. Arriving in a t-shirt set matched with shots, it was a vibrant two-piece detailed with a bold pattern. This pattern is now featured on the new footwear design in a color palette of red, black, blue, yellow, and purple. The mudguards, heels, and eyestays feature the jagged detailing that is reminiscent of the retro outfit.