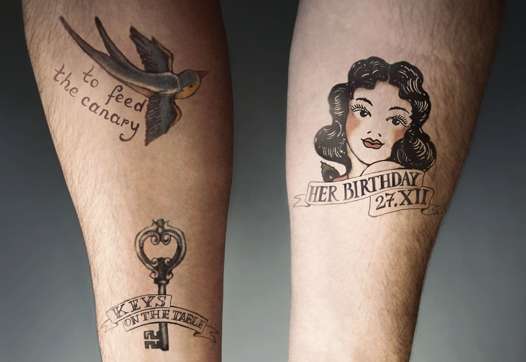 This Noopept Everlasting Memory Ad Does Away with Written Reminders

Amelia Roblin — November 11, 2011 — Marketing
References: milkcreative.ru & adsoftheworld
Share on Facebook Share on Twitter Share on LinkedIn Share on Pinterest
One might think of the movie Momento with a glance at this Noopept Everlasting Memory ad, but the humor behind the ridiculous image has a hint of unfortunate truth. The human mind is constantly erasing information, often at a rate greater to the accumulation of knowledge, to the point where simple tasks occasionally prove tricky.

The Milk agency of Moscow created this single print to promote a nootropic drug which improves the cognitive performance of the brain. It can apparently ameliorate attention and enhance memory so that one would have little need for helpful reminders.

Depicting a simple sticky note on a refrigerator door would have more familiarly demonstrated the message behind this Noopept Everlasting Memory ad, however, the image of a man with inked arms establishes a greater extreme of inept recognition. Revealing a need to permanently etch the location of one's keys and a wife's birthday into one's skin, this picture is all the more memorable to consumers.
4.5
Score
Popularity
Activity
Freshness
Access Advisory Services