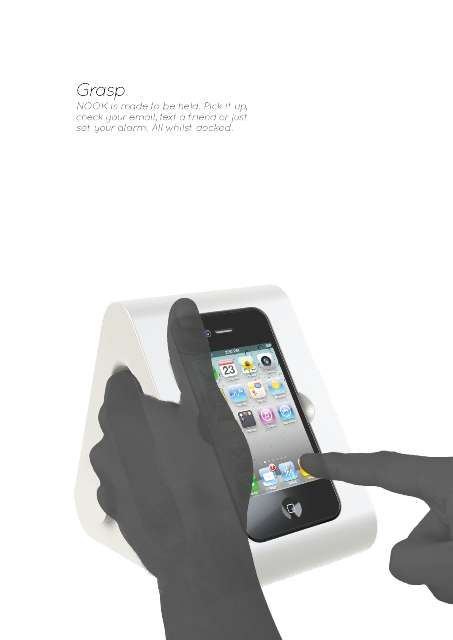 Michael Hines — June 10, 2012 — Tech
References: robertbye & technabob
Share on Facebook Share on Twitter Share on LinkedIn Share on Pinterest
The NOOKone iPhone dock is a conceptual device designed to turn your iPhone into an alarm clock. The NOOKone was created by Robert Bye, a British designer who became frustrated with how poorly designed iPhone alarm clock docks were. Bye took out his frustration on his imagination, leading him to design the NOOKone iPhone dock.

The NOOKone iPhone dock is designed to be simple and functional. It can be picked up and held, which should make playing with your phone while it's docked easier and safer. The dock has hidden speakers in the rear, and it's charged using an induction plate. Bye imagines his dock coming with an included alarm app that is simple and functional, much like the NOOKone itself. The whole project is still in the conceptual phase, but it has already received considerable attention, garnering 130,000 views in a day.
4.2
Score
Popularity
Activity
Freshness
Get Better and Faster