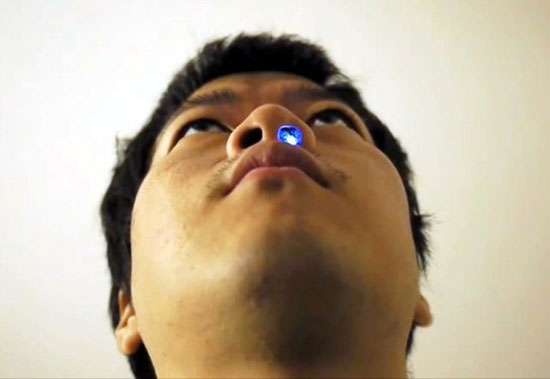 Meghan Young — December 22, 2011 — Unique
References: blog.makezine & dvice
Share on Facebook Share on Twitter Share on LinkedIn Share on Pinterest
Noda Akira has developed one of the most bizarre inventions ever: a LED light that fits perfectly into someone's nostrils. Nevertheless, it is in the same vein as the LED Smiles, although not as potentially 'useful' as the Beauty Lift High Nose gadget.

Created for the Make Tokyo Meeting 07 exhibit, Noda Akira's LED nose accessory can only be described a cosmetic creation for now. Noda Akira incorporated a temperature monitor so that every time a breath was expelled from the nose, the device emitted a eerie blue light from within the nostril. According to Noda Akira, the device isn't that comfortable to wear as it feels like "dry snot." Although seemingly pointless, this odd device could potentially be linked to breathing studies of some sort.
4.6
Score
Popularity
Activity
Freshness
Get the 2021 Trend Report FREE