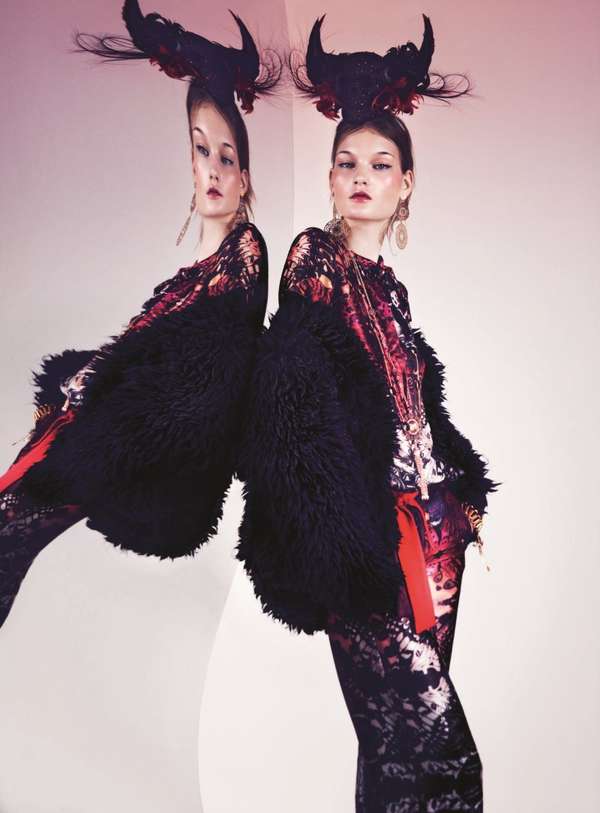 Meghan Young — August 23, 2012 — Fashion
References: nk.se & fashiongonerogue
Share on Facebook Share on Twitter Share on LinkedIn Share on Pinterest
Playfully distorted, the NK Fall 2012 campaign is straight out of a carnival funhouse. It centers around model Kirsi Pyrhonen and her mirrored image. Instead of being a true representation of the brunette beauty, however, her reflection is completely warped, which is typical of funhouse mirrors. Of course, that doesn't interfere with her fierce poses in the least. It does lend a quirky quality to the Swedish retailer though. Kudos to set designer Marika Åkerblom.

Shot by photographer Kirsi Pyrhonen with art direction by Garbergs, the NK Fall 2012 campaign showcases an eclectic mix of prints, furs and textures that are complemented with decorative headpieces. Styled by Robert Rydberg, the looks are perfect for the autumn season. They were perfected with tousled tresses by hairstylist Dejan Cekanovic and glowing skin by makeup artist Anya De Tobon.
3.2
Score
Popularity
Activity
Freshness
Get Trend Hunter Dashboard