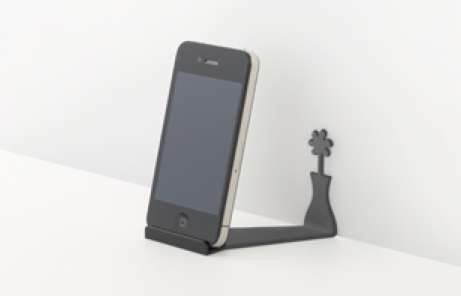 The Nendo Shadowstand Casts a Flower on the Wall

Amelia Roblin — December 5, 2011 — Art & Design
References: nendo.jp
One usually expects his shadow to at least loosely resemble the true contour of his body, so the discovery of cast patch of shade that looks entirely different is the sort of absurd sight reserved only for dreams.

The Nendo Shadowstand explores this whimsical idea on the smaller scale of cellphones. The iPhone, for instance, makes an exceedingly boring outline out a rectangle which has allowed the designer of this handset prop to exercise a great deal of imagination. The iPad and iPhone stands incorporate a a handy ledge and supportive square backings, but the brace that keeps the piece balanced takes the form of a single flower in a vase. When the Nendo Shadowstand is pushed back against a wall, the playful visual is best expressed.
3.8
Score
Popularity
Activity
Freshness

Washroomtastic iPhone Stands
The iPlunge Holder is Not for Toilets