Eva Mendes Would Rather Go Naked

Boycotting to Force Change
Next
Set of
Related
Ideas 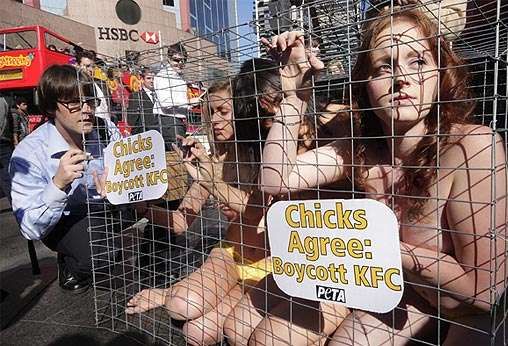 karl burkart — September 21, 2008 — Naughty
References: news.au
Share on Facebook Share on Twitter Share on LinkedIn Share on Pinterest
PETA has been leading the “naked” protesting” trend in a series of nonviolent (and eye-pleasing) protests involving hot women and men getting naked to draw public attention to pressing issues of animal cruelty—bull fighting, live export, and factory farming.  Their most recent campaign targets the poultry giant KFC, which retails an estimated 736 million chickens annually (NYT).  PETA has been successful in the past, raising awareness about the unethical treatment of cattle by McDonalds and Burger King chains.

The KFC boycott targets the enormous factory farming operation required to produce and process 1,400 ‘CPM’ (chickens per minute).  Animals are tightly caged, fed a host of hormones and antibiotics to deal with the rampant disease in such enclosed environments, and then machine-slaughtered.

The latest protest this summer in Sydney resulted in the arrest of three caged women holding signs reading “Chicks Agree: Boycott KFC.” This was surprising to many as the normally lenient Australian police force allows public protesting as long as traffic is not disrupted.  In this case, “causing a stir” was used as a reason to book the three women during a temporary suspension of Sydney laws coinciding with a national day of pilgrimmage.

Activists are concerned over the growing world-wide trend of using “special powers” during key events to get around the normal due process of law in order to expedite the removal of protesters, a trend that we saw at the 2008 RNC convention in full force.

Former Baywatch babe and PETA supporter Pamela Anderson’s joined the protest (not topless) at a Gold Coast KFC as part of a four-year global campaign against the fast food chain over the way chickens are raised, slaughtered and transported.

PETA has been effective in garnering media attention in Australia through the nudity technique.  Earlier this year PETA orchestrated a visually stunning display of dozens of naked men and women blocking the street to protest “live export”—the shipping of packaged live animals (saves on refrigeration costs).  The image creates an empathetic association between human and animal bodies, making the point crystal clear: what’s bad for animals is bad for us.
6.8
Score
Popularity
Activity
Freshness
Get Better and Faster