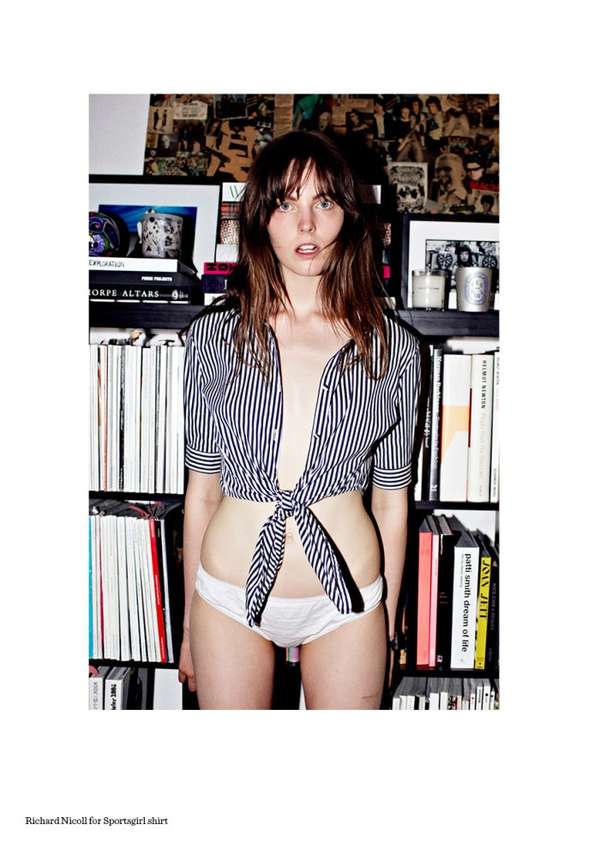 Myf Shepherd began her modelling career in March of 2008 when she signed with Chic Management, a local Australian agency that began placing her in campaigns regionally. When Shepherd took a trip to New York just two months later, she was scooped up by NEXT Model Management in New York and immediately began appearing in shows for top designers like Karl Lagerfeld, Marc Jacobs, Versace and Prada.

The Myf Shepherd LoveWant Magazine July 2011 editorial is a little different from the upscale modelling the Aussie is used to. Shot by fellow countrymate Bec Parsons, Shepherd is captivating as she appears pared down, sporting little to no make-up while alternating between retro band tees (Nirvana!), colorful nighties, and plaid shirts. The Myf Shepeherd LoveWant magazine July 2011 shoot is memorable for its ability to exude an organic sexual intensity that is often missing from over-styled, big budget fashion magazine shoots.

I think it's safe to say we'll be seeing a lot more of Myf Shepherd in the near future. Get acquainted.

Implications - In the last few years, there has been a marked increase in the value of advertising that appears candid. Campaigns like the "Dove Campaign for Real Beauty" have placed a premium on marketing that eschews models and actresses as frontpeople of campaigns and celebrates the average, every day person as the real stars. A company can capitalize on this consumer spirit for the authentic by investing in marketing that is understated, not heavily airbrushed, and appears candid. The lowkey vibe shows a sincerity that resonates with consumers eager to buck conventional advertising.
6.4
Score
Popularity
Activity
Freshness
Get the 2021 Trend Report FREE