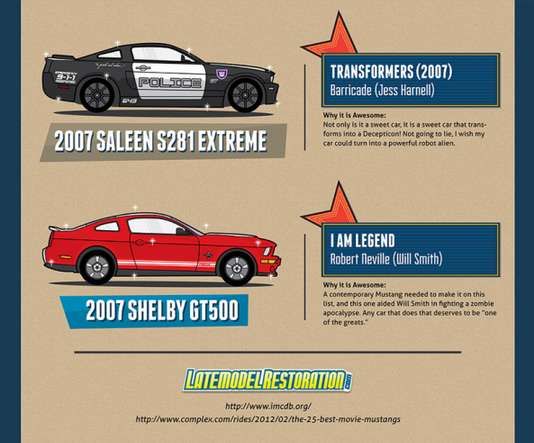 M — July 7, 2013 — Autos
References: latemodelrestoration & visual.ly
Share on Facebook Share on Twitter Share on LinkedIn Share on Pinterest
Some would cite the Mustang car as the all-American car, and in this 'Mustangs in the Movies' infographic, viewers can take a look back through time at all the famous Mustangs used in American cinematography history. From Steve McQueen's famous green 1968 GT290 Fastback Mustang to the red 2007 Shelby GT500 Mustang used in I Am Legend, Mustangs are one of the most iconic cars of the film industry.

A symbol of masculinity, strength and virility, a Mustang car is designed for the ultimate ladies' man. Mustang cars have played major roles in the Charlie's Angels films, Back to the Future, War of the Worlds and, more recently, Transformers. Regardless of the time period, Mustang cars have remained a distinctively recognizable part of American heritage.
3.7
Score
Popularity
Activity
Freshness
View Innovation Webinars