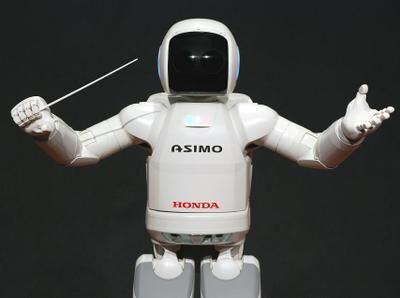 lourdes sanchez bayas — April 24, 2008 — Tech
References: blog.wired
Share on Facebook Share on Twitter Share on LinkedIn Share on Pinterest
A Honda robot will conduct the Detroit Symphony Orchestra in a concert that will take place on May 13th in Detroit. The Honda Asimo robot will pick up the baton and lead the human musicians in a rendition of Man of La Mancha's Impossible Dream.

"The irony of a Japanese automaker trotting out an advanced robot in the Motor City will likely be lost on most of the attendees, who will be students from the Detroit School for the Arts," Wired says.

"In addition to the concert, Honda plans to donate $1 million to the orchestra's Power of Dreams' educational fund.

"Honda will also partner with the Detroit Symphony Orchestra over the next five years to offer training in string instruments, a scholarship program, an educational concert series, support for live classical performances and a fundraiser."

It's all neat, yet somehow I feel a bit unnerved by this.

Here's more on the Asimo: