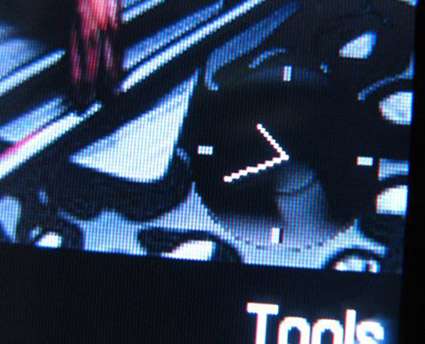 The company who brought us some of the most innovative and sexy handsets, recently felt obliged to respond to accusations that they were using what appears to be an image of a penis in the clock face of some of the Motorola handsets. Maybe it was meant to be a subliminal thing that got out of hand...

Motorala responded, "The image that you see is actually the result of shading applied to the clock background graphic to give it more of a three-dimensional appearance, in line with the theme of the phone. The graphic is actually built as concentric circles stacked on top of each other, with a lighting filter applied to give it depth.

"Unfortunately, the result is something that has some readers questioning what they see, and Motorola apologizes for any perception of impropriety as it was certainly not our intent at all. The graphic is only in a few models of our phones with certain software builds installed.

"We're already taking steps to ensure that the clock face graphic in question will not appear in any future products. If someone wants to remove the graphic from their view, they can either select Menu -> Settings / Personalize / Home Screen / Clock / Digital, or Options/Customize Home/Clock Style/Digital, depending on their phone model."
6.1
Score
Popularity
Activity
Freshness

Expert-Designed Smart Gardens
The Urbotanica 'UrbiPod' was Designed with Horticulturalists