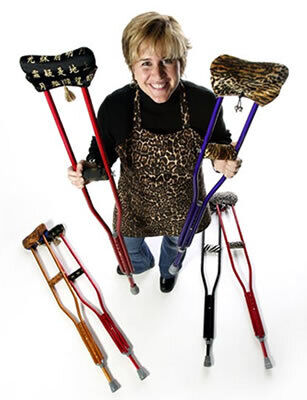 Cowbag — December 2, 2007 — Unique
References: lemonaidcrutches
Share on Facebook Share on Twitter Share on LinkedIn Share on Pinterest
Whilst cool crutches have been featured on Trend Hunter before, I think Lemon Aid Crutches stand out as they are more glam than stylish, with leopard prints and opulent fabrics featuring heavily. The story behind the company is pretty sad too. It was set up after a plane crash claimed the lives of the founders husband and small son, and left her on crutches for over a year. Needed something to funnel her energy into Lemon Aid Crutches was born.

LemonAid crutches come in a range of sizes & styles including Safari Adventure, British Tradition and Island Relaxation. They also do bags to be attached to the crutches to act as a bag.