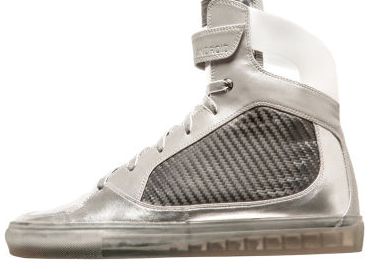 The Moon Boot Sneakers is a Tribute to Apollo 11's Anniversary

Meghan Young — October 16, 2014 — Fashion
References: jackthreads & gizmodo
Share on Facebook Share on Twitter Share on LinkedIn Share on Pinterest
The name of the Moon Boot Sneakers might drudge up memories of clunky footwear in gaudy metallic materials, but this design could be farther from the case. Instead, the Moon Boot Sneakers are sleek and chic in a sci-fi way. Boasting a relatively minimalist aesthetic, the pair of shoes do have a silver sheen, but in a light and tasteful way.

The high-top design of the Moon Boot Sneakers gives the footwear a boot-like appeal, yet they can easily be worn throughout the year. Designed to celebrate Apollo 11's anniversary, the sneakers were created by GE in collaboration with JackThreads and Android Homme. They are made out of thermoplastic rubber, carbon fiber and are covered in 3M's reflective Scotchlite material.
1.8
Score
Popularity
Activity
Freshness
Get Trend Hunter Dashboard