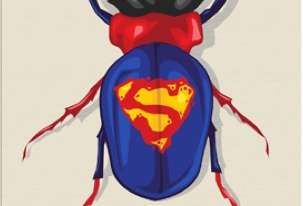 Jason Soy — April 18, 2012 — Pop Culture
References: mattcantdraw.deviantart & blog.thaeger
Share on Facebook Share on Twitter Share on LinkedIn Share on Pinterest
Matt Cowan, also known as Mattcantdraw to deviantART users, is an illustrator who doesn’t shy away from using pop culture references in a creative way. In his latest offerings, he renders a series of superhero-inspired bugs, colored similarly to the tight and flashy costumes familiar with the general public. Giving his work an academic twist, Cowan even gives each insect a scientific name. The level of geekiness in this collection is simply off the charts.

What’s also remarkable about Matt Cowan’s work is that each beetle-like creature appears to be anatomically correct, with pincers, thorax and all. One has to wonder whether Cowan was initially inspired by bugs or superheroes when approaching this project.