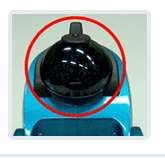 Katherinev123 — September 22, 2009 — Tech
References: irrobot & chipchick
Share on Facebook Share on Twitter Share on LinkedIn Share on Pinterest
Don’t you just hate it when video game characters don’t seem to care whether you win or lose? Well, the robots in the Marubot Football League game care. The Marubot Football League game is an arcade game from Korea that features wireless-controlled plastic robots that actually express their emotions depending on the situation in the game.

Created by IR Robot Co., the Marubot Football League game comes in a two or four player format in which players control the robots through wireless joysticks.

Each robot can make a face and display emotion—for instance, if you make a goal, your robot looks happy; if you don't succeed, the robot looks sad. What you don’t want is the angry face because that means you’ve just tied with the other team!
1.2
Score
Popularity
Activity
Freshness
Access Advisory Services