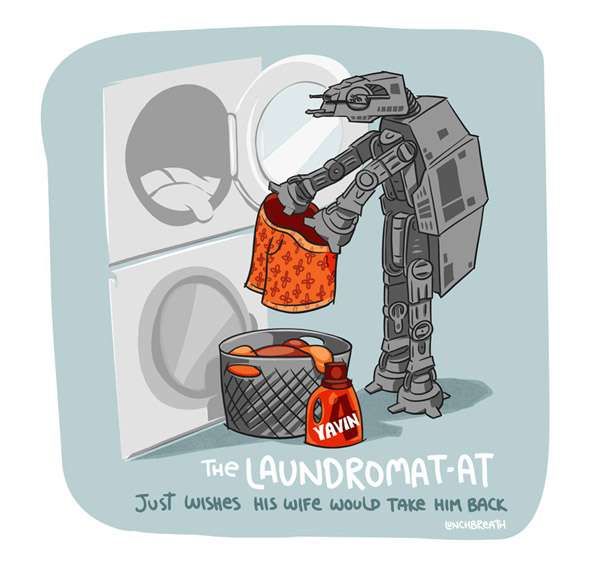 Jason Soy — June 21, 2012 — Pop Culture
References: lunchbreath & blog.thaeger
Share on Facebook Share on Twitter Share on LinkedIn Share on Pinterest
For those unfamiliar with Lunchbreath, he’s a web comic artist that has produced some of the most humorous and insightful funnies found on the Internet to date. For this particular series, Lunchbreath re-imagines the AT-AT, or Walkers, from Star Wars as robots who aren’t living up to their potential. Each comic incorporates the AT-AT into a pun and then hilariously depicts the menacing Empire machines as sad beings doing the laundry or filling up red plastic cups at keggers.

Lunchbreath also cleverly hides mini-jokes within each one-panel comic, such as naming the AT-AT “Arthur T. At” in the picture titled ‘THE BUREAUCRAT-AT.” My favorite bit however has got to be seeing the AT-AT, which doesn’t even have opposable fingers or thumbs, trying to fold a pair of vibrant orange boxers in 'THE LAUNDROMAT-AT.'