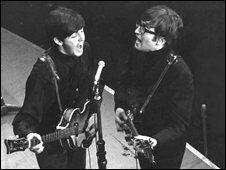 Bianca — July 2, 2008 — Pop Culture
References: news.bbc
Share on Facebook Share on Twitter Share on LinkedIn Share on Pinterest
Who would have thought that a retro Beatles interview could resurface 44 years after taking place and cause a global headline frenzy? A 1964 tape containing a 9 minute interview of the Fab Four (when McCartney was only 21!) was aired on BBC Radio 4 this week after being found in a musty garage. While the visual portion wasn't salvageable, the audio was decent enough to air on radio.

"I was playing at a garden fete in the village where I lived just outside Liverpool playing with a skiffle group," John Lennon said of meeting Paul McCartney. "And he came along, and that's how we met."

It seems every major newspaper covered the story about the "lost" Beatles interview, including the New York Times, Reuters, The Associated Press and E! Online.

"Normally we sit down and try and bash one outâ€”but then again, there's no formula, because he [Lennon] could come up with one one day, completely finished," McCartney revealed of the song production process. "We still say we both wrote it though."

"Sometimes we write them on old pianos, anything that's lying around," McCartney added.

Film historian, Richard Jeffs found the tape hidden among 64 rusty film canisters. Although the label was faded, the BBC says it was possible to make out the names of the journalists who had conducted the interview.

The most exciting part of the story?

"I've got 63 other cans to open to see what we've got," said Jeffs. "It is very much like being a man with a million-pound note."
2
Score
Popularity
Activity
Freshness
Get Better and Faster