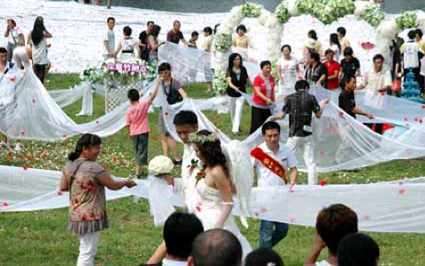 The groom did not want “a cliché wedding parade or banquet,” something he successfully avoided by not only surprising his bride-to-be with the ultra-long train, but having wedding guests actually unravel the 7,083-foot thing--a feat that took about three hours.

An expression of love that cost the groom approximately $5,800, the dress was considered by the groom’s mother to be a “waste of money.” For the couple, though, it was worth it. They have since submitted their attempt to the Guinness World Records in London.

According to the groom, "Both the length of the dress and the number of silk roses pinned on the wedding dress can make history."
5.6
Score
Popularity
Activity
Freshness
Attend Future Festival Virtual