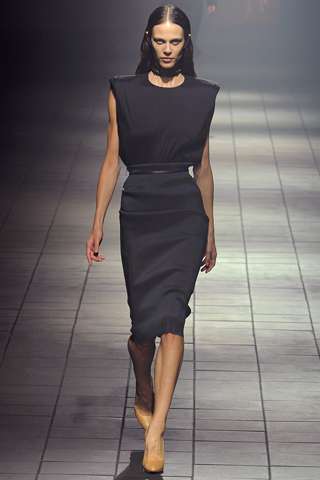 The Lanvin Spring 2012 Collection is Sleek and Sophisticated

Souzan Michael — October 3, 2011 — Fashion
References: lanvin & style
Share on Facebook Share on Twitter Share on LinkedIn Share on Pinterest
There is always something so strong and passionate about Alber Elbaz's collections for Lanvin and the Lanvin Spring 2012 collection was no exception. Style.com writes that "[b]efore the show, he mentioned he had in mind an angel in hell, but as he drew and drew, the angel returned to earth."

The Lanvin Spring 2012 collection was not whimsical and airy -- nor was it soft, as many spring collections tend to be. Instead, it was predominantly dark, incredibly sleek and streamlined. Only a handful of brightly colored pieces and blush tones made an appearance, yet somehow the line maintained that tough girl aesthetic that makes Lanvin so desirable to women of all ages.

Pencil skirts reigned supreme at the Lanvin Spring 2012 show, signaling a return to glamor and sophistication that only Alber Elbaz and Lanvin could bring back with such force, making it feel fresh and new.
6
Score
Popularity
Activity
Freshness
Attend Future Festival Virtual