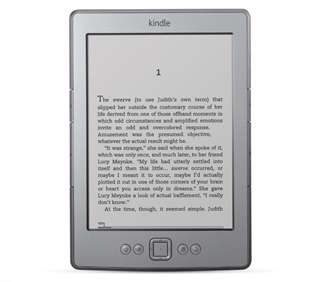 Amazon Wants Everyone to Have the Affordable $99 Kindle Touch

Omar Yusuf — September 30, 2011 — Business
References: amazon & gizmodo
Share on Facebook Share on Twitter Share on LinkedIn Share on Pinterest
Somehow book burning is a palpable idea, especially since physical copies will be made redundant by Amazon's new $99 Kindle Touch -- expect for everyone to have one by the end of the holiday season. For the impatient types, it's available now and ships today.

Amazon is on a roll and knows it! The e-commerce company proudly explains on their frontpage splash that theirs is a company that "works hard to charge customers less." The pat on the back comes attached to news of three new products, the first of which is the all-new $79 Kindle -- slightly less powerful, but it comes at a generous price. The second featured item, and the center of attention, is the $99 Kindle Touch that eschews the traditional button interface with a touch-sensitive surface. The last to be introduced was the Kindle Fire, which comes loaded with contract-free 3G wireless at no cost!

Remember how I said everyone would have one? This deal is mind-bogglingly good and could help boost readership nationwide.
2.8
Score
Popularity
Activity
Freshness
Jeremy Gutsche Keynote Speaker