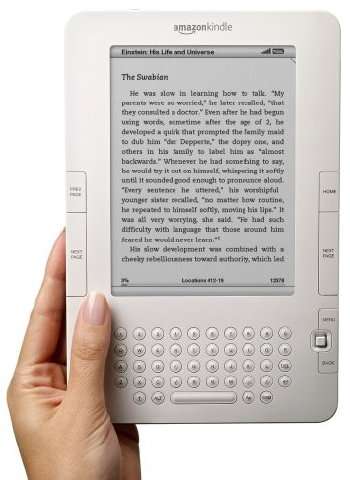 Kindle 2 Reads to You, Stores Photos and Surfs the Web (UPDATE)

E-book readers have come and gone in the past. Amazon not only set the e-book industry on its bottom with the new reader, but now they’re taking e-book readers to another level by introducing better portability, a web browser and the ability to store and read MP3s.

That’s not all. The new version of Kindle can read to you with its new text-to-speech functionality. In addition, the new Kindle allows you to store your photos and introduces a wider range of color display.

Amazon hopes not only to entice more casual readers into the fold, but they wouldn’t mind taking on the business world either. The new version of Kindle adds the kind of versatility that might appeal to business users.

Kindle now adds the ability to get rid of the laptop and bring all your documents over to Kindle. It reads Word, HTML, text, and JPEG files, making it easier for you to access the things you need to access in one convenient, comfortable environment.

If the new features are any indication of the progress Amazon hopes to make, we can all look forward to the next version of Kindle.
2.6
Score
Popularity
Activity
Freshness
View Innovation Webinars