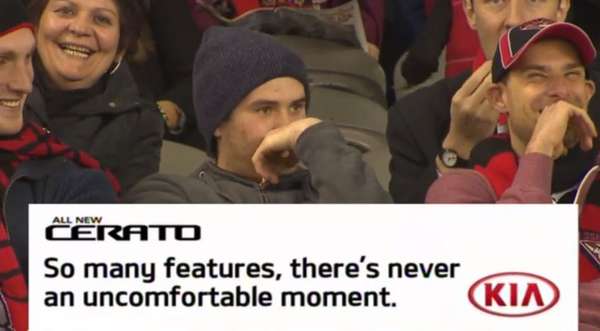 A Kia Ad Embarrases a Spectator to Promote the Kia 'Cerato'

Alexander Lam — May 28, 2013 — Marketing
References: kia & creativecriminals
Share on Facebook Share on Twitter Share on LinkedIn Share on Pinterest
Using the crowd camera of a football game in Australia, an ad by Kia called 'Pick of the Day' shamed a spectator and used it to advertise their new 'Kia Cerato'. Developed by ad agency Innocean Worldwide, the ad caught an unsuspecting spectator picking his nose and displayed the footage for the entire stadium to see.

The ad was very effective in raising awareness for the Cerato with the stunt gaining the attention of 30,000 football fans. Though the target of the campaign may now feel negatively about Kia, the ad managed to gain the attention of thousands of people.