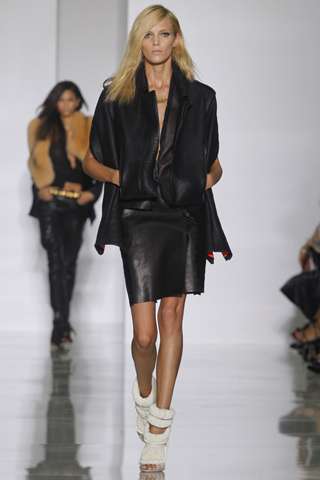 The Kanye West Spring 2012 Collection is the Rapper's Debut Line

Souzan Michael — October 4, 2011 — Fashion
References: fashionetc & style
Share on Facebook Share on Twitter Share on LinkedIn Share on Pinterest
It's hard to deny that Kanye West is a musical genius; the man just knows what he's doing when it comes to music, but when it comes to designing, the fashion world was apprehensive about the Kanye West Spring 2012 collection. The rapper showcased his first ever collection during Paris Fashion Week; impressive for anyone, let alone a hip hop mogul (does anyone know how he landed this gig, anyway?).

The Kanye West Spring 2012 collection was certainly an effort that deserves to be applauded. Fashion industry A-listers like the Olsen twins, Azzedine Alaia, and Dan and Dean Caten from Dsquared2 sat in the front row to see what West had to offer.

And what he had to offer was, in the simplest terms, sex. The collection was provocative, to say the least. With necklines down to there and skirt slits up to there, it seems that Kanye certainly thinks that skin is in.