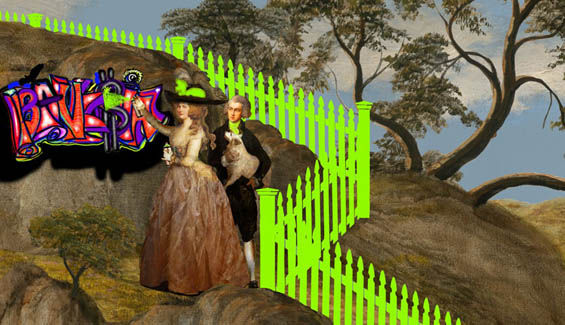 Meghan Young — November 14, 2013 — Art & Design
References: bettgallery.au & beautifuldecay
Share on Facebook Share on Twitter Share on LinkedIn Share on Pinterest
The work of Joan Ross is piggybacked on the work of others, which is something she has been fascinated with since she was a child. She essentially retouches colonial paintings with modern streak of neon and even the occasional act of graffiti in a way to express such themes as imperialism, consumerism, throwaway culture, global warming, tagging, naming, claiming and more.

Predominantly using the paintings of Joseph Lycett, who was outed as an impostor who forged his work, Joan Ross writes, "In a sense I am continuing his tradition of taking something and forging something new out of it." Joan Ross transforms his calm and subdued landscapes into loud scenes. She states, "The mentality behind colonialism can manifest itself in many ways and the ongoing creep, nay, invasion of high vis yellow and fluoro orange are a modern-day example."
0.4
Score
Popularity
Activity
Freshness
Access Advisory Services