Getting High Off Garden Plants 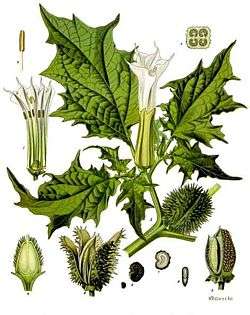 Jimson Weed (Datura stramonium) otherwise known as Gypsum Weed, Stink Weed, Loco Weed, Jamestown Weed, Thorn Apple, Angel's Trumpet, and Devil's Trumpet among others, is a common weed that grows though out the US and Canada as well as the rest of the world.

It's a pretty plant that some gardeners choose to grow as an ornamental plant with its showy trumpet shaped purple or white flowers and prickly seed cases. The problem is that some people know just enough to get themselves into trouble.

If you eat any part of the plant you can experience true hallucinations, the problem is the amount needed to produce the effect and the amount that will kill may not be very far apart. So it's just a good rule to leave this plant alone since it kills a few people every year. The Navajo had a saying about Datura, 'Eat a little, and go to sleep. Eat some more, and have a dream. Eat some more, and don't wake up.'

Reusable Period Pants
Intimawear by Bodyform is Eco-Friendly and Reusable

22 Peculiar Pot Innovations
Getting High, From Tattoos to Google