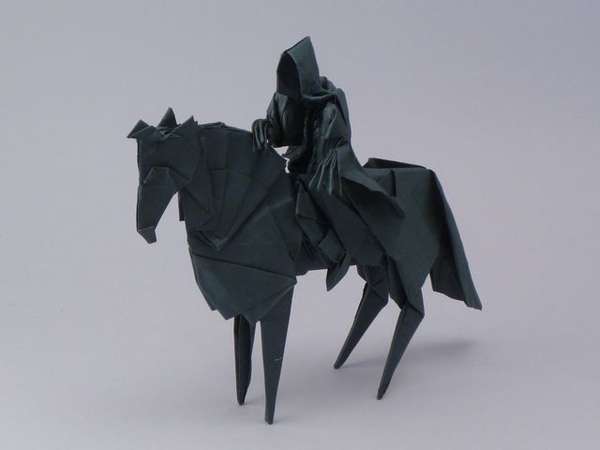 Jason Ku Recreates Dark Riders from Lord of the Rings

Ana Lopez — December 14, 2011 — Art & Design
References: scripts.mit.edu & mymodernmet
Artist Jason Ku found in the traditional Japanese art practice of folding paper a good way to express his love for Tolkien’s movie Lord of the Rings. Ku was introduced to origami since the age of five, and these fantasy figures show his immense talent.

This eco-friendly version of a dark rider is strikingly well-done and detailed. The ebony hands of the rider have the skinny and creepy aspect that they also have in the movie, which makes this 'Nazgûl,' as they’re also called, real and scary.

This art piece by Jason Ku shows how origami can create all sort of figures and pop culture icons. Ku is the president of the Massachusetts Institute of Technology’s origami club OrigaMIT, and he is the managing editor for OrigamiUSA’s online magazine, The Fold.
1.8
Score
Popularity
Activity
Freshness