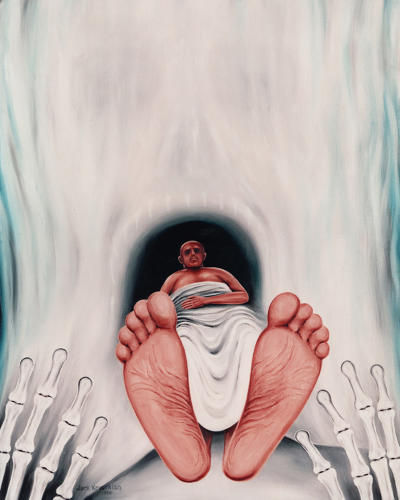 Rahul Kalvapalle — April 16, 2014 — Art & Design
References: galleriesparta & fastcocreate
Share on Facebook Share on Twitter Share on LinkedIn Share on Pinterest
American physician Dr. Jack Kevorkian was one of the world's most famous (or infamous, depending on how you look at it) proponents of euthanasia and assisted suicide in the 90s. His facilitation of over 130 assisted suicides landed him the moniker 'Dr. Death', in addition to eight years in prison.

Now, an exhibition of 11 of Dr. Kevorkian's oil paintings -- which convey his loathing of human pain and suffering to the point of preferring death -- is on display at the Gallerie Sparta in West Hollywood till April 30.

In one painting, called 'Coma,' a sick man is being sucked into the gaping mouth of a pale ghostly entity that is reminiscent -- not by chance -- of an MRI machine.

The paintings illustrate how pain transforms the body into a prison, engulfing its victim in a world of unspeakable suffering and agony. They are a grim and artistic representation of Dr. Jack Kevorkian's hypersensitivity to human suffering brought on by disease and poor health.
1.3
Score
Popularity
Activity
Freshness
Get Better and Faster