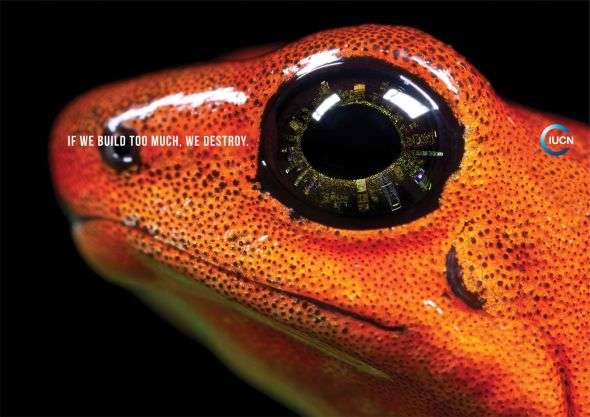 Amelia Roblin — October 5, 2011 — Eco
References: mccannworldgroup & adsoftheworld
Share on Facebook Share on Twitter Share on LinkedIn Share on Pinterest
There is as much depth of meaning in this IUCN Destruction campaign as their is detail in the exquisite photographs. The imagery of the eye brings up a number of references that allow these three prints to be interpreted in several different ways with the same idea in mind.

The message that the International Union for Conservation of Nature strives to put forth is that "if we build too much, we destroy." To visualize this concept, the McCann Worldgroup of Bangkok, Thailand, chose to frame close-up images of a frog, a toucan and a jaguar so that the focal point of each composition is the eye. Providing the consumer with insight and a new perspective of the creature's suffering at man's expense, this IUCN Destruction campaign lets you look through the eyes of these powerless animals to see the fear and horror behind power lines, fire and the dense urban jungle.
2.4
Score
Popularity
Activity
Freshness
View Innovation Webinars