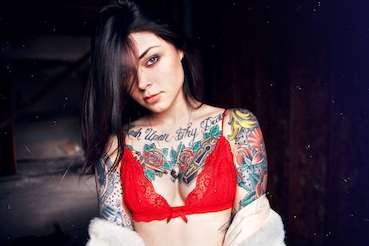 One of the keys to Isaac Joel Torres’ success is his ability to hone in on shooting subjects that are out of the box. His specialty shines the spotlight on subjects with tattoos. His portfolio almost doubles as a lookbook for your local tattoo parlor. The photographs feature a stunning assortment of beautiful women covered in ink, posing in a series of seductive poses. Some of these fantastic photographs have led to Isaac Joel Torres getting his work published in Front Magazine UK, Ink Butter and INKed Magazine. Not bad for a self-taught photographer.

Implications - Elaborate tattooing among women is becoming more commonplace in today's society as hipster style and vintage pin-up girl fashion maintains a strong niche. With several reality television shows focusing on the tattoo industry and the role of women in a world that is traditionally viewed as masculine, you can expect to see more photographers focus on this interesting subsection of society.
6.2
Score
Popularity
Activity
Freshness
Get the 2023 Trend Report FREE