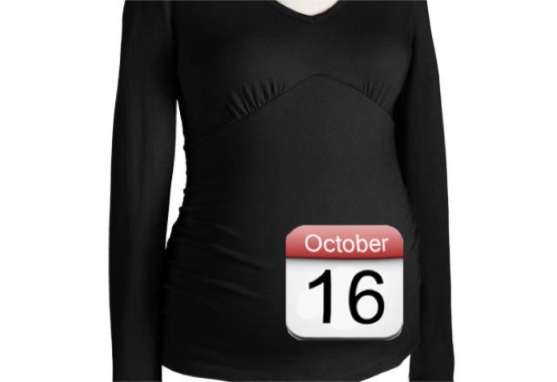 Amelia Roblin — May 14, 2011 — Pop Culture
References: etsy & chipchick
Share on Facebook Share on Twitter Share on LinkedIn Share on Pinterest
"Generation i" is upon us, and anyone in Western society under the legal voting age will probably not have known life without the internet. They may have even acquired iPods before puberty. These iPhone Maternity Shirts, however, playfully extend this fact to the concept of tech-savvy embryos.

An Etsy creative known as Feeling Artsy spends her days working with technology as an accountant, and has cleverly taken some of the most common and recognizable smartphone icons and applied them to the tops of pregnant women. The coupling of these two ideas actually works quite effectively, creating an endearing pop culture humor that only the fetus can't yet understand.

My favorite of the iPhone Maternity Shirts is the one with the iCal symbol, which could display your baby's due date to the world. The camera and the SMS icons have as much a of witty effect, suggesting perhaps that the unborn might actually be trying to send messages and captures snapshots of the outside world.
3.7
Score
Popularity
Activity
Freshness
View Innovation Webinars