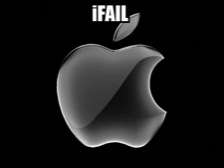 Going Like Sixty — July 12, 2008 — Tech
References: venturebeat
Apple has failed its minions. The iPhone has a failure to be activated in many, many instances. Uber-blogger Robert Scoble stormed out of the Apple store without a phone, and the many customers who were sent home with new iPhones received instructions on how to activate it later. After waiting hours, some people even days, in line, no one wants to walk out of a store with a phone that doesn't work. Apple and AT&T have nobody else to blame but themselves. They require the phone to be activated in the store. So a high demand (duh) or any other glitch kills the positive buzz. Epic Fail.