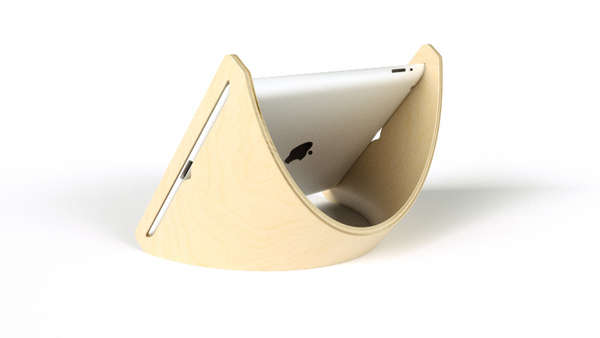 Brandon Bastaldo — March 26, 2013 — Art & Design
References: store.g86design
Share on Facebook Share on Twitter Share on LinkedIn Share on Pinterest
Since its release, the iPad has been a constant seller that has attracted consumers because of its sleek, minimal design that promotes on-the-go living and overall efficiency, so this wonderfully simple iPad stand created by Sne works well to compliment the no-frills vibe the iPad relies on.

Crafted out of Baltic Birch, Sne's iPad stand has a limited release of about 2,000 units and based on this product's ergonomic design, it will be a hot seller. The key to Sne's success with this curvy iPad cradle is its intuitive understanding of the nature of iPad users.

Saying that the product was greatly influenced by modernist and minimalist designs of the early 20th century, it's Sne's "hunger for a return to craftsmanship, design clarity, and greater meaning in the environment," according to its site, that sets this iPad stand apart from the thousands of other tablet accessory manufacturers.
3.8
Score
Popularity
Activity
Freshness
Jeremy Gutsche Keynote Speaker