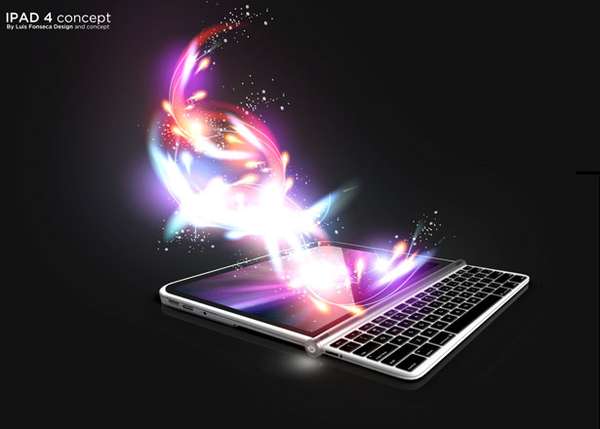 Michael Hines — May 29, 2012 — Tech
References: coroflot & tuvie
Share on Facebook Share on Twitter Share on LinkedIn Share on Pinterest
Designer Luis Pedro Fonseca is boldly going where no designer has gone before with his iPad 4 concept. Fonseca's iPad 4 is an unofficial concept, but it does have some awesome features that would look great in the next edition of Apple's iPad.

The most notable thing about this iPad 4 concept is its slide-out keyboard. Many have complained about the lack of a keyboard on both the iPad and the iPhone, so this addition is a no-brainer. Another awesome new element is the concept's Bang & Olufsen speakers, designed to make headphone-less sound quality superb.

An HD 1080 12 megapixel camera ensures that your every facial blemish will be viewable on Facetime, and an aluminum frame ensures that the iPad 4 is easily recyclable. Apple will most likely pass on the slide-out keyboard, but the aluminum frame, epic speakers and powerful camera are something they might look into. Is it too early to begin iPad 4 fever?
2.3
Score
Popularity
Activity
Freshness
View Innovation Webinars