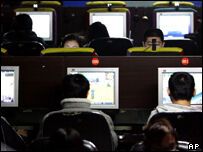 The report showed that British Internet users spend an average of 164 minutes online daily â€” the equivalent of 41 days a year â€” compared to 148 minutes watching television. Men spend on average 172 minutes on the web daily, and women 156 minutes.

Londoners and Scots are the most dedicated net users, according to the survey, carried out by the TNS institute last month involving 1,030 adults aged 16 to 64. A major activity is online shopping, which accounts for an average annual spend of £446 (650 euros, $780) per user. The increasing use of computers at the workplace coupled with improved technology allowing broadband connections in private homes are the main reasons for the Internet's domination, the report said.
2.5
Score
Popularity
Activity
Freshness
Get Trend Hunter Dashboard