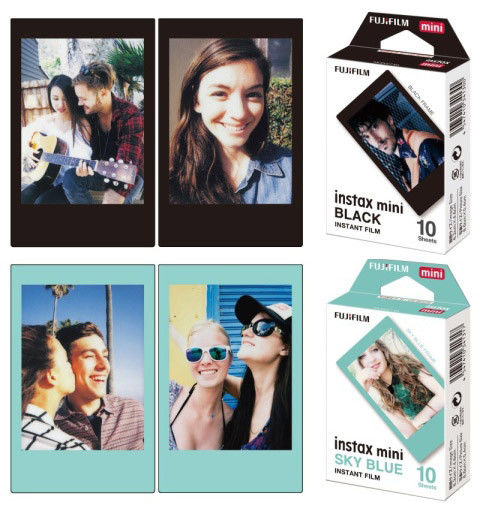 Joey Haar — October 25, 2016 — Tech
References: fujifilm & digitaltrends
Share on Facebook Share on Twitter Share on LinkedIn Share on Pinterest
The Instax Mini is a film camera from Fujifilm that revives the nostalgic instant photography popularized by Polaroid in decades past. Those film cameras, with which consumers can snap a picture and immediately get a printout of the image, have distinctive, bordered photo slides, and Fujifilm is capitalizing on that look with their new cartridges for the Instax Mini.

The borders of the new Instax Mini film slides were originally only available in standard white, but the company now offers 'Black' and 'Sky Blue' borders. The decision to release these stylized borders likely comes in response to the popularity of nostalgic filters on social media sites like Instagram. Though film is somewhat more restrictive in terms of style, colored borders give consumers the opportunity to express themselves beyond the content of the pictures themselves.
1.4
Score
Popularity
Activity
Freshness
Get Better and Faster