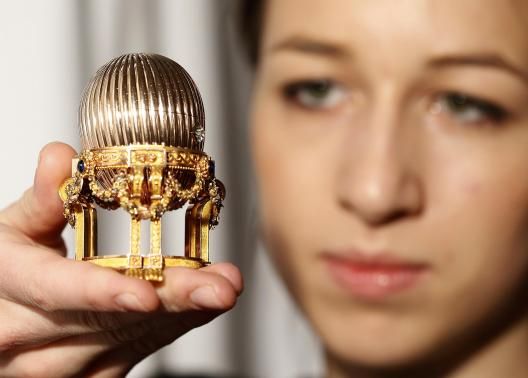 Rahul Kalvapalle — April 8, 2014 — Fashion
References: faberge & reuters
Share on Facebook Share on Twitter Share on LinkedIn Share on Pinterest
A Faberge Imperial Easter egg that hasn't been seen in public for over a century is going on show in London just in time for Easter. The 'Lost Third Imperial Easter Egg' was made by Peter Carl Faberge as an Easter present for Russian Empress Maria Feodorvna, all the way back in 1887. It was recently saved from being melted and destroyed by an American scrap dealer.

Just slightly taller than a cupcake, the golden egg sits on a tripod composed of lion paws. It is encircled with golden garlands strung from blue sapphires and topped with rose diamond bows.

The priceless Imperial Easter egg will be displayed from April 14-17 at the showroom of London antique dealer Wartski, which specializes in dealing with Faberge products.

It's like finding a missing Rembrandt and you didn't tell anybody," said Kieran McCarthy, director of Wartski. "It may disappear again and may not be seen for, who knows - I would not be surprised if it didn't come out for another 112 years.
6.3
Score
Popularity
Activity
Freshness
Attend Future Festival