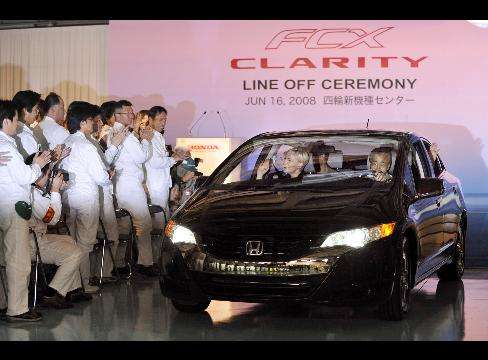 Rose A. Valenta — June 18, 2008 — Autos
References: bloomberg
Share on Facebook Share on Twitter Share on LinkedIn Share on Pinterest
Honda Motor Co. President, Takeo Fukui, announced the release of the FCX Clarity hydrogen fueled car from the new-model center in Tochigi Prefecture, located northeast of Tokyo. `If we can bring costs down by a certain amount, I think we can start mass-production,' he said.

Over the next three years, Honda plans to lease more than 200 FCX Clarity vehicles in the U.S. and Japan. It already has five American customers for the car with availability only in California at this time. A Honda spokesman, Yuuki Sakurai, said, "Honda is adding low-pollution models including fuel-cell and gasoline-electric hybrids as record-high oil prices and tougher carbon-emission rules boost demand for cars that use less fuel. There's still a lot of research that's left to be done on fuel-cell cars. It's difficult to fathom what the industry will look like ten years down the road.'

The FCX Clarity will initially be offered for lease at $600 a month, the automaker said. Among the first U.S. customers are Little Miss Sunshine producer, Ron Yerxa, Jamie Lee Curtis, and Christopher Guest.

Currently, The Honda Civic is the only model in its product line offering a hybrid option. The company is also developing a hybrid sports car, the CR-Z, and plans to add a hybrid Fit compact car option in the near future.

I discussed this vehicle with a few of my Cashmere Mafia friends from NY, as we leafed through some turn-of-the-Century â€œGood Housekeepingâ€ magazines. We were looking at 100 year old ads for Baker Electric Cars complete with froufrou interiors and makeup kits. It seems automakers were going down this hybrid road before and marketing the gas-free cars to women. So, what happened, that quiet electric engine needed a little testosterone?
3.6
Score
Popularity
Activity
Freshness
Get Trend Hunter Dashboard