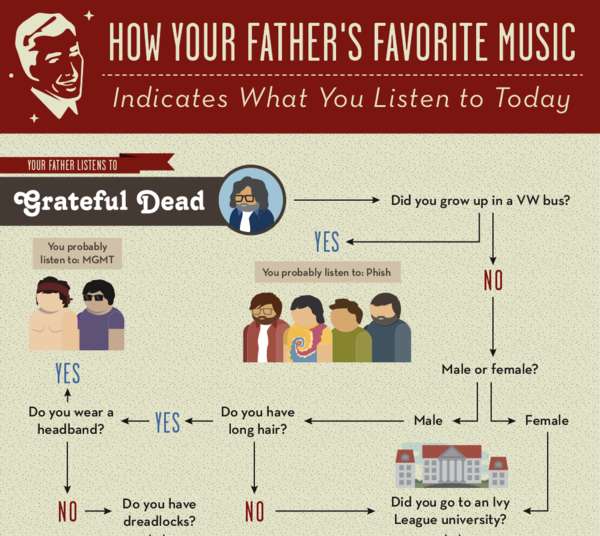 How Your Father's Favorite Music Influences What You Listen to Today

Corinne Guirgis — June 28, 2011 — Pop Culture
References: blog.sonos & dailyinfographic
Share on Facebook Share on Twitter Share on LinkedIn Share on Pinterest
Music tastes differ on a variety of levels, from time period to culture and environment, but one thing that surely influences music taste is the sounds individuals are exposed to growing up. The music of my parent's generation varies in quality, but it was a generation undoubtedly filled with greats from The Beatles to the Rolling Stones. While some children with an appreciation for their parent's music are inspired to emulate their taste, many move in the opposite direction, finding music that their parents see as culturally irrelevant and "not real music." Regardless of the direction children choose with regards to music, the influence of their parent's musical tastes is significant and undeniable.

Implications - The sounds and styles of music have changed dramatically across generations with the evolution of culture and technology. The growing variety of musical styles that exist across the world have a strong two-way relationship with culture, where the culture within which one resides is heavily influenced by music, and vise versa.
2
Score
Popularity
Activity
Freshness
Get the 2021 Trend Report FREE

Brilliant Booze Guides
For Those Looking to Make a Homemade Brew, the Beer Craft Book is for You